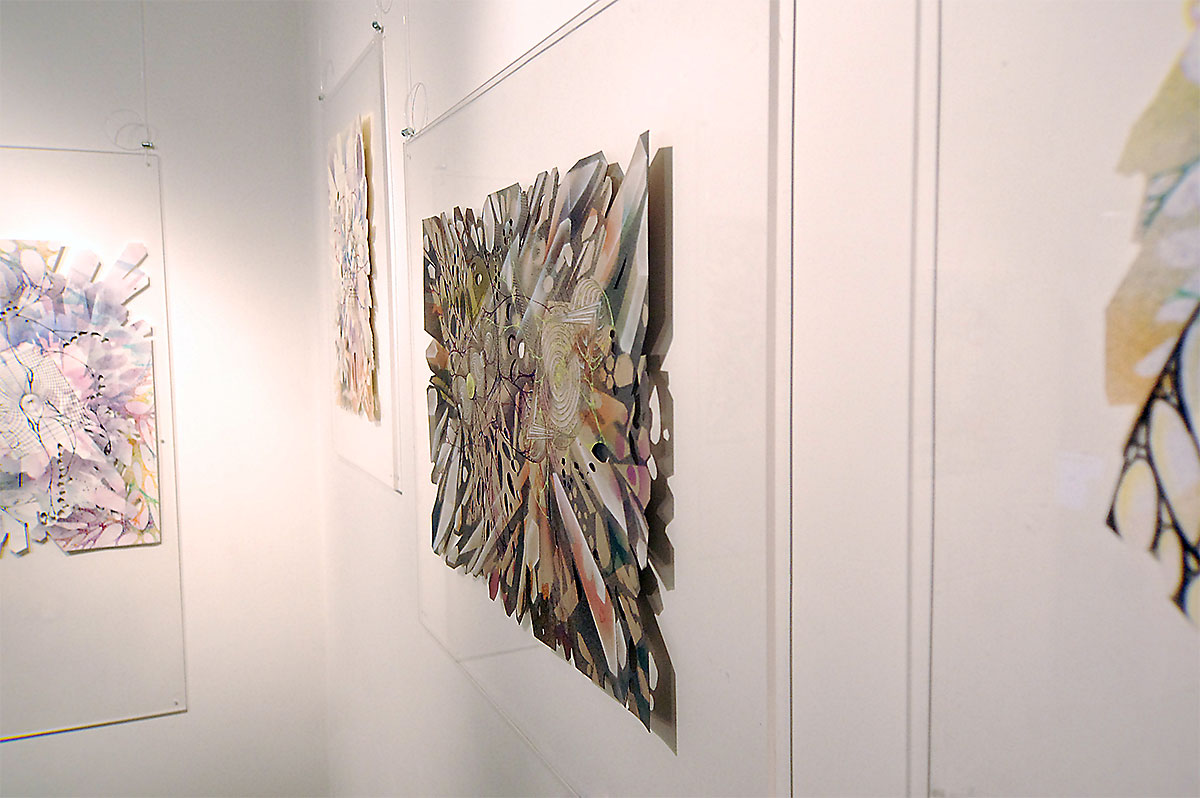 The Utopie Elettriche exhibition introduces a new way of processing the printing of legendary documents. It proposes treatises and historical scientific demonstrations that have been tried or abandoned, with a new elaboration by the artists, everything starts from the cutting out of the paper, continuing with the printing with antique presses and watercolouring. We enter a world alive and full of colors that portrays the fluid and complex environment of the theory of everything, passing through that of the strings that shapes matter and describes radiation, space, time and floating in this colorful world we make a journey in theoretical physics through the fundamental physical entities and the poetic imagination of Gulia and Karolina Lusikova.

Electrical utopias: the combination of words, by ear, seems to come out from the pages of a notebook by Filippo Tommaso Marinetti. It is not so. The ear sometimes deceives. And the eye? Let's try to direct it on one of Gulia and Karolina Lusikova's "scientific" watercolors: a diagram of elegant lines, on which are placed symbols of mathematical equations is at the center of a jagged nebula of colors, from cosmic blue to deep purple - one would be tempted to say ultraviolet if it were not that this is not perceptible by the human eye. Everything is caught in a slow explosion; a kaleidoscopic fragmentation. Perhaps caused by a supernova.

The lines, with curves that make you think of a fantastic aviary, are the graphic representation of one of Maxwell's equations on electromagnetism. In physics, these equations are considered a masterpiece of synthesis. They explain, in a unified formula, electricity and magnetism. They inspired Hertz, Righi, Marconi and Einstein. They were the first step in understanding the nature of light. And they opened to a new conception of space. And here the connection between science and art becomes closer. Tighter.

Maxwell's equations are from 1865, even if their influence persists until quantum mechanics and the third millennium. In the painting on paper, the two authors, mother and daughter, cut out empty spaces, segmented outlines, traced lymphatic ribs, colored tendons that look very much like some representations of hyperspace seen in science fiction movies. It is a strange world. Their compositions suggest crystals that contain worlds. And they suggest others. We are light years away from the progressive confidence in the science of the Futurists. It is true that the equations precede Marinetti &'s manifesto; Co. and that in the early 1900s they released their concentric circles in scientific research and technological application. In other works, the graphs, the diagrams that Gulia (mother) and Karolina (daughter) put inside their works as impermanent centers of gravity, are even older. Even older, as in the case of an acrobatic curl by Albrecht Durer, a measurement around which color thickens. But the point, once again, is in perception. More than a century has passed since the publication of the Futurist manifesto - full of passion for electricity, utopias and dystopias. In these 107 years there are a number of things: Einstein's theory of general relativity and Heisenberg's uncertainty principle, the American flag on the moon and Stanley Kubrick's floating monolith in celluloid. There are black holes, subatomic worlds where everything seems possible, space telescopes. The B-rays that flash in the darkness near the Tannhauser gates seen by a replicant, just to name one more science fiction masterpiece. The gravitational waves, just discovered. Electricity has become - or rather has returned - mysterious. And the adventure of art in space is a leap into the unknown.

It's not just about outdoor, cosmic spaces. In the four-handed watercolors painted by mother and daughter - and much talked about, discussed during the execution - there are interior spaces. This time, too, they are the result of scientific suggestions. So we find another diagram, immersed in green and purple - a lymphatic green, a purple suitcase of tricks of a forest fairy. This time he does not speak to us about physical laws, but wants to draw the unconscious. The attempt is real, this too dates back to the late 1800s. It was done by a New Zealand psychologist, Benjamin Betts, who measured himself with the extravagant exercise of giving an exact and mathematical form to the stream of consciuosness of the human psyche. The result is reminiscent of the stylization of flowers and plants, one of which brings to mind a large trumpet-shaped installation by Indian artist Anish Kapoor in a permanent exhibition at Maxxi in Rome. A utopian exercise, no doubt. Like the attempts of magicians, Renaissance artists, alchemists, and theoretical physicists to formulate a representation of the whole. Of a world without stretch marks. Of the perfect man. Utopias are almost always a failure in the real world, it is true. After all, the term means in "no place". An immobile and ideal world, towards which one can tend, as if to touch it. Electricity, on the other hand, is movement by definition. Energy. Karolina and Gulia are two artists inspired by utopia, perhaps more than science. Or rather from the tension towards utopia. From the energy that utopia puts in motion. That's why I closed the scientific adjective in quotes at the beginning. Their science is full of mysteries. Of particles in motion. As science must be for artists. It is no coincidence that among the diagrams inserted in their crystal charts is the one drawn by a nineteenth-century magician, Eliphas Lévi, aka Alphonse Louis Constant. It is one of the most evocative, reminiscent of the astrological drawings of the alchemical and astrological manuscripts of the Renaissance. This time the colors are compact, like a chest. They evoke the passing of time. The time that changes the point of view.

If in Marinetti's pen the electric utopia could sound like a provocative slogan, the works of Lusikova on display at the Menexa space have the thrill of oxymoron: opposite meanings that give off illuminations. Or at least they give off sparks. As is precisely the case with electricity. And to close with a hint of another space in vogue, the digital one, no Google search with the words Marinetti and electric utopia has given results.