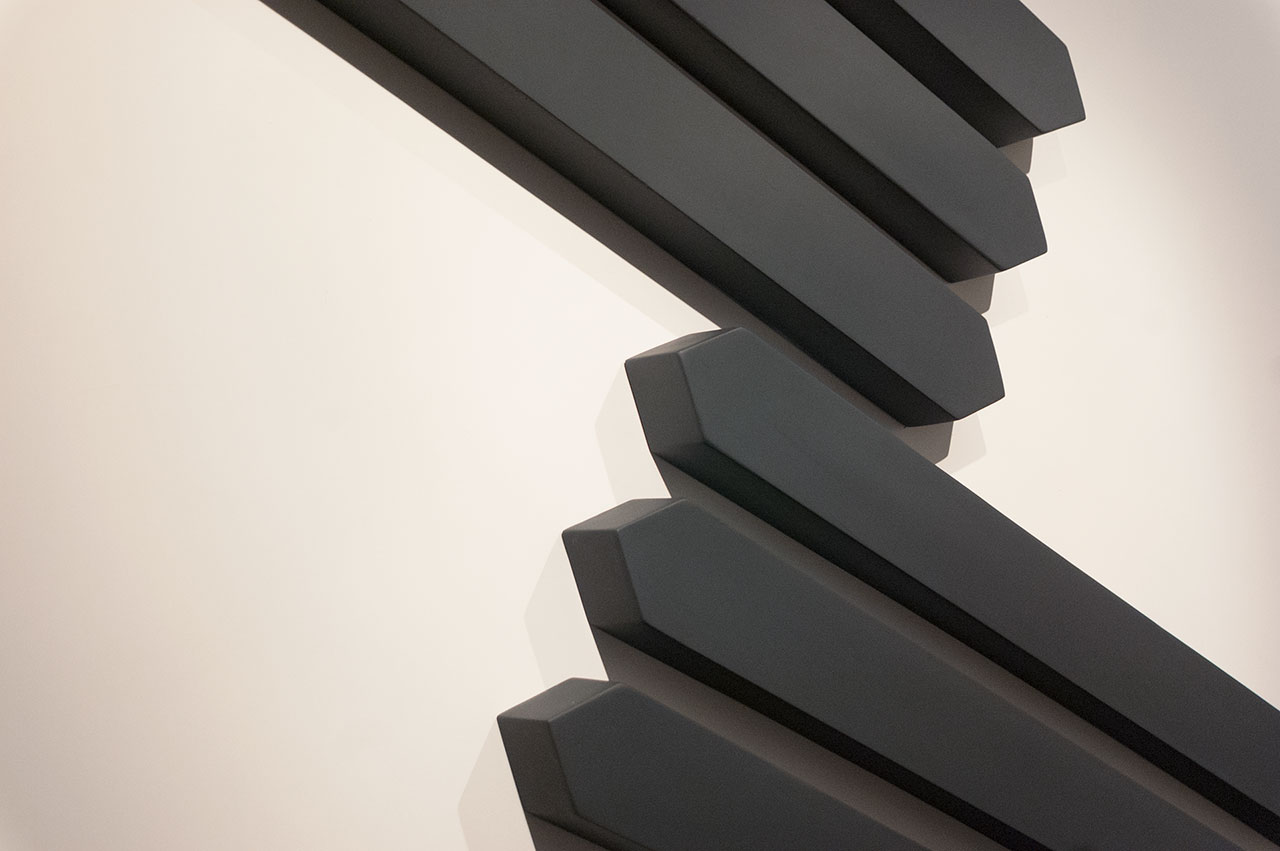 The series of modular sculptures DIMENSIONLESS, represents the completion of a wider reflection on space/direction/dimension already started by Jasmine Pignatelli with the previous series of works of 2015, Directionless. In both series, the module/vector constitutes the activating element/sign of dynamics that interrogate the space in completely different ways: where (in Directionless) the tensions generated by the work involved the directional space and the vector signals of the modules gave life to possible trajectories without providing any privileged direction, here (in Dimensionless), the modules/vectors articulate conflicts of forces, perceptual vibrations and new relational dynamics of forms in dimensional space, pushing the viewer to a dialectical interrelation with the experience of the dimension as the absence of reference systems and as a perceptive possibility for him to freely recreate his own relationship of scale with the forms within the space-place-environment.

The volumetric geometry of space is thus on the one hand affected by the phenomenon, remodeled and altered, but at the same time, it is not detectable in it any possible spatial certainty within the ongoing modification, if not the awareness of a permanent transformation that generates positive tensions, which is therefore necessary but not calculable a priori.

In a detective movie an officer finds herself having to photograph in detail the scene of a crime that happened near an old railway line. Before starting the shoot, the policewoman highlights a 10 dollar bill to be photographed together with the rest of the shot. The well known dimensions of the banknote, fix in the photos those of all the rest; one could not, without the banknote, go back to the size of the other objects photographed. In the series of DIMENSIONLESS works Jasmine Pignatelli has removed the equivalent of that banknote. If the banknote has the function of blocking the absolute scale, its subtraction creates a different perception of space that does not fix privileged "scales" and creates new spatial references. The attempt is to intervene on the perceptive possibilities of the observer and on the spatial possibilities of the work through a sort of geometrization of the environment. Directionless and Dimensionless represent two different ways of using the same modulus/vector and the title asks the viewer to focus on two different characteristics of space: direction and dimension. In DIMENSIONLESS the modules are all parallel, they do not fix any other dimension or scale than the one imagined or perceived by the observer.