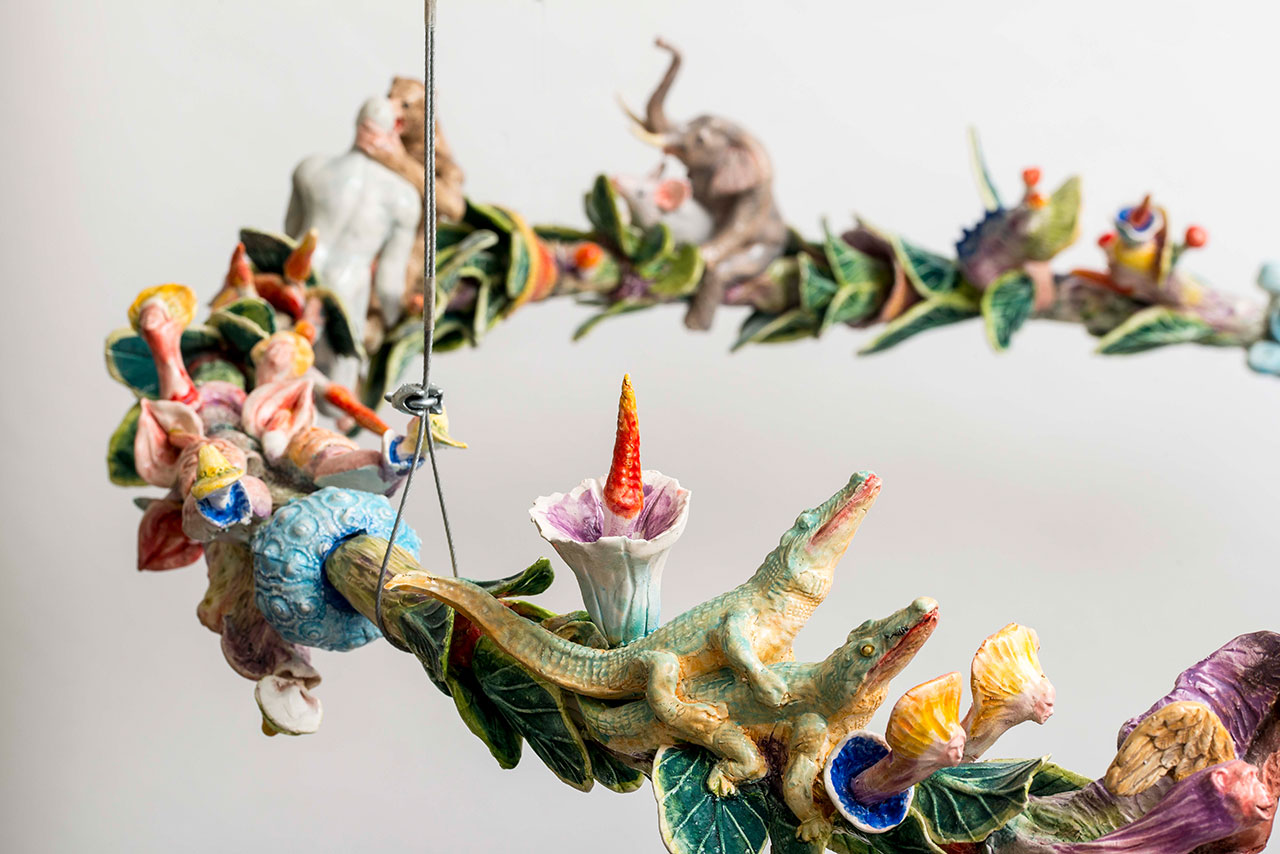 The distinctions are always valid, to better understand in art. According to this way of proceeding (which has many illustrious examples, such as Contini who totally distinguished Dante from Petrarch, or Worringer who dissected abstraction and empathy in art), there are linear or multiverse artists. Simone Bertugno irremediably belongs to the second type. In front of his works it is necessary to be always well disposed towards the wonder, of a capital and indomitable proliferation, of an excess that, in order to be more effective, is disposed on models coming also from a curious and voracious antiquity.

The images of Venus are extremely varied in antiquity. From Cypride to Callipigia, all versions have combined sex with beauty, with the joyous multiplication of expansion. Venus, in the words of Lucretius, "is the only element that, the more you possess, / the more your chest burns with infinite greed": the words of the poet testify to a pleasure that only a long time later was chastised, in fact ardor, linked to the body, and daring, related to knowledge, have the same origin.

This last work by Simone Bertugno testifies a passage: from a regulated and consequential proliferation to a widening of the desiring fields (Deleuze and Guattari would say); this is the deep eroticism of this research, which through the combinations of bodies seeks the laws of attraction of the elements. In previous works we could see an ordered and consequential germination, now instead there is an uncontrollable proliferation. The associations take place on levels regulated more by whim and possibility than by the laws of nature. However, in its evolutionary progress, with amphibians, it has not omitted the interval between terrestrial animals and fish, and with the various species it has also covered the space that goes from terrestrial to volatile, and then from animal to vegetable to mineral. There is all a crossing, a mixing, a corrupting, such that the law of crossing and encounter seems to be a constant, supreme as survival itself. It's as if nature wants to experiment itself, and, by creating new crossbreeds, it generates, through new experiences and mixtures, new creatures.

The creatures travel erotically. From the Rape of the Sabine Women to the Oedipus complex, it has always been known that survival is linked to the dialogue between different worlds, because one can only love the different, and the more one seeks it far away, the more wisdom and enjoyment grows. Even art cannot be taken away from this law. With Henry Miller: "Human creatures form a strange fauna, a strange flora. From a distance they seem negligible, from up close they can seem ugly and evil. But above all, they need to be surrounded by air, enough space -space, even more than time". In the words of the writer, fauna and flora, space and time mix. In this exhibition by Simone Bertugno we have gone from a plausible productivity to a Leibnian space, from the straight to the circle, with a demultiplication of possibilities that surprises how much (when) it generates. For Simone Bertugno, however, experimenting is erotic, and also covers the space between the curiosum (the rare phenomenon, the prodigy) and the love for the infinite ramifications and branches of fantasy, which in nature quietly and regularly becomes knowledge: there is no greater attraction than the one that unites desire and wisdom.