SOS – Save Our Soul 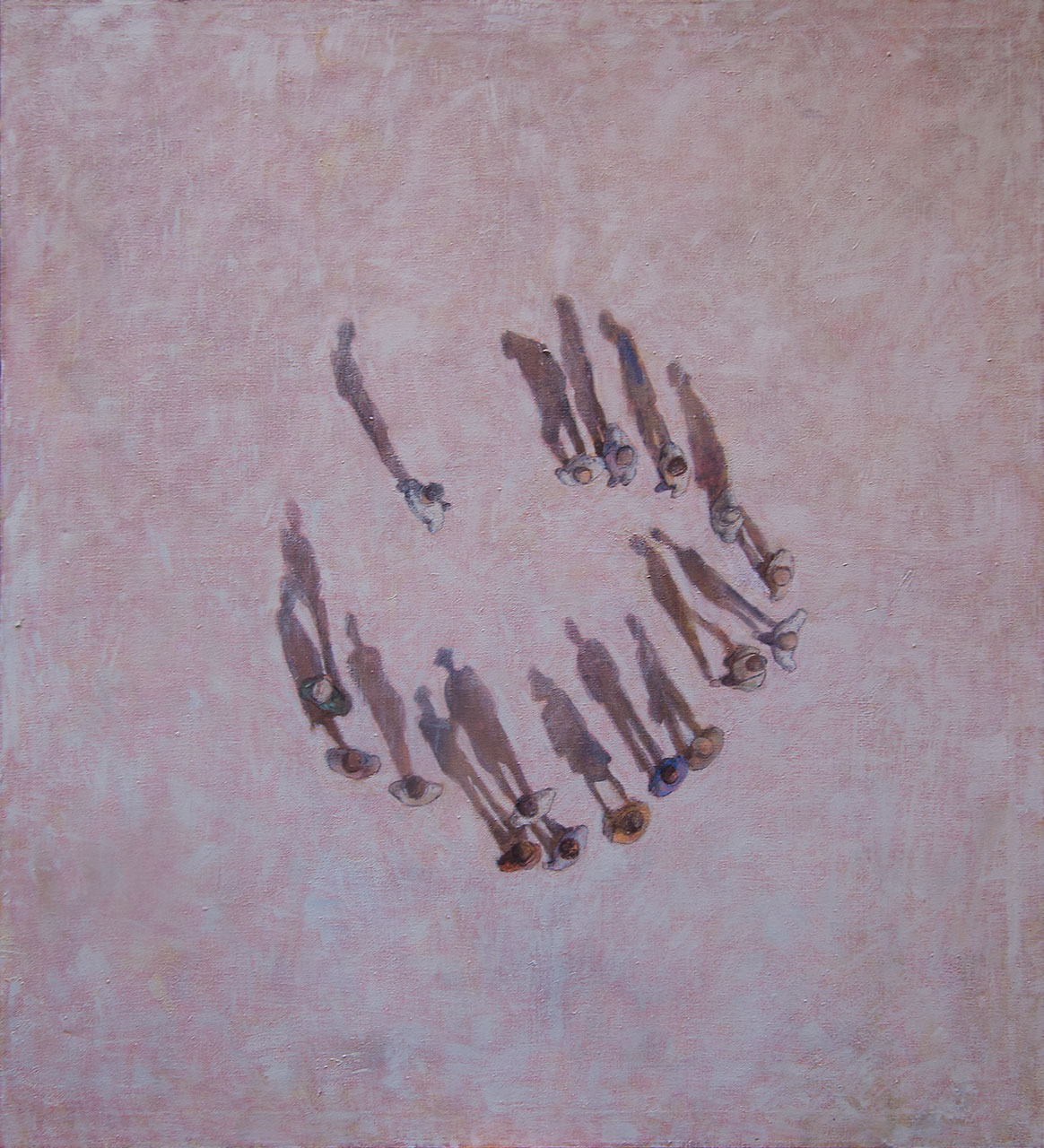 In front of the works presented by Robin Clerici at Spazio Menexa the viewer wonders what the real subject of the paintings is, the image of the characters seen from above is in the foreground, but are the subjects or their shadows more important? The representation from above is accompanied by the presence of the shadows of the individuals and one wonders why these people are in that place and what they are doing, in an atmosphere of rarefaction and suspension where the individuality of the characters is captured, a group amalgamates through the shadows that take on a specific identity. The shadows would seem to dialogue with each other and become the dominant subject, as if to indicate that under the apparent indifference of the individuals a connection of another nature is created between the souls of the people.

Spontaneously a reflection arises on the invisible, there is a precise geometric placement that could reveal the hidden meaning of the work and that has been deliberately hidden, and also the desire to contrast the two larger paintings on display; a circular and a linear arrangement that support the multiple relational possibilities between individuals and that lead us back to the same isolation proper, only the shadows meet in a multiplicity of relationships and connections. It is interpreted the definition of a circle which is the symbol of completeness and union, and of a straight line which has the meaning of order, parity, alignment; the shadows that are in the foreground follow the geometric order but distort the meaning minimizing the importance of the arrangement and creating a relational mixture. In the other paintings the artist investigates the individuality of people, the triptych "W 54st." depicts the trend of passers-by in a street in New York who walk individually where there is no mixture and no relationship, they are people who have needs and goals accompanied by their own shadows; in this case the shadow is what of us can not be resolved in collective value, it indicates the true individuality and correspondence.

The dense material smeared on the canvas gives the paintings the heaviness that serves to influence the gaze to give the sense of suspension in an unreal place and in an imprecise time; the colors are varied compared to his previous works, there is a tendency to lighten the tones that emphasizes what should be complementary to the drawing that is not for its meaning, the shadows in fact stand out well delineated as additional characters overpowering the weight of the material. The feeling of being able to stop time, the passage between the past and the future, is an important additional element that the artist manages to realize in his works, is thus eliminated in favor of conceptual meaning the dimension in which we conceive and measure the passage of events, we find ourselves stripped of distractions having to consider the essentiality of individual and collective existence.

The elegant work of Robin Clerici has an evocative force that comes through the subtle physicality of his characters and the solitude determined by the desolate place where they are, the weight and concreteness of the material painting keeps us suspended in an indeterminate time transmitting a slight emotional and meditative tension.