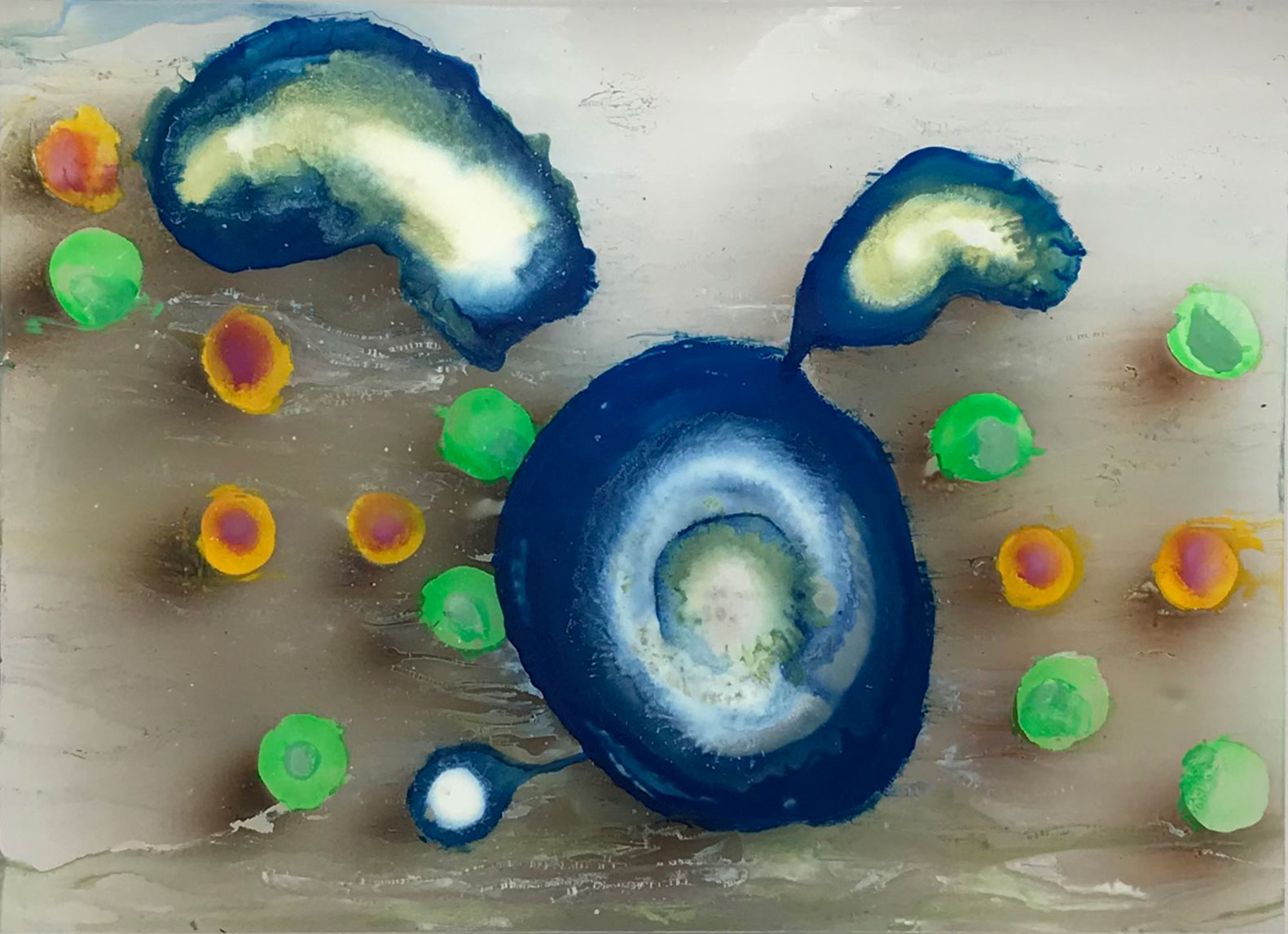 "... Creation lives as genesis beneath the visible surface of the work."

Painting is, among the means of expression, the most used, the most authentic and natural, and, at the same time, the most abstract, pure meaning, in which the center of creativity of the form is accentuated, following step by step its genesis.  Paul Klee always says "at the beginning there is the action... above is the idea". For the artist, the work therefore represents an experimental and spontaneous moment of creative ideation. Where he clearly testifies to the formation of the image, the sign as writing that, coming out of the unconscious, becomes visual thought.  And in his latest works Giacinto Occhionero under the title "Duralar Duralex" expresses the sense of a visual essentiality, only apparently confused, but structurally linked to the ironic and colorful vision of life. Expressing with its irrepressible sign a depressing gestural line, guided by a manual impetuosity, full identity of an emotional and cultural expressionism inserted in a solid reality.

The structure of each work is therefore composed as the expression of a non-verbal thought, transformed into an articulated structure and consolidated in the revelation of reality. Where it gathers a stylistic exercise capable of transforming a desire, in the irony of creativity, in a dilation of time and space. Stains, fast signs, chromatic overbearingness, contain the definition of space, contending with nature and poetry the restless search for formal solutions of the work. Assisted by the use of plastic materials and synthetic paintings in an experimental way, his field of investigation is concentrated in an abstraction that extends from geological suggestions to space and is articulated in a dynamic vision of form. The cohesion of intentionality and accidentality sediments in the proliferation of chromatic "dots" and "circles" which, freeing themselves in a whirling motion, give back a sense of space and depth. At the same time they act as "visual dissuaders" denying the same depth through irregular densities, contrasting the structural and compositional continuity. The "circles" and then the "drops" are characterized by a chromatic range that varies from metallic to acid colors describing explosions and vortices.

Another interesting application of his chromatic wisdom is the relationship between color and movement, in which he sets out to produce simultaneous and contrasting effects by means of a mediatic and diligent union of coloristic ranges with different luminosity. This mechanism creates a different feeling of perspective and a surprising assimilation of color. All this suggests to the viewer to admire a material/immaterial world, landscapes, flowers, visions of the earth's atmosphere and even sexual reminiscences that lead him towards the immaterial, towards transcendence.

The resulting visual illusions highlight intuitive processes and relationships between concept and form, consciousness and physical reality. The artist, with his gestures, establishes a relationship with life, evolving the way of seeing beyond aesthetic expression into a condition of fantastic privilege. But once again he does not look outside, but inside. Inside his origins, inside his being, choosing the ideal gesture, the ideal form, among proportions to contradict, colors to exhibit, words to suggest and oneiric signs to sublimate. In making art Giacinto Occhionero makes no concession to style, to the needs of the spectator, but the tenacious and patient chasing of the sign on the transparent surface of the materials used as a base expresses a search for something that exists. Often there isn't even a story to describe and one arrives directly inside the image, bending the technique to the expressive need of the vision.

With the construction and deconstruction of forms that are freed from their function of expressing a concept, the rapid "puffs of color" of the spray cans he uses represent a point of arrival, a definition in itself of the form with painful attempts to recognize an inner and parallel reality. In this way a poetic dimension emerges in which space, movement, rhythm, light and vibrations are elements referable to an objective and emotional oneiric vision, in which, once again, the sign is never entrusted to pure instinct but to a creative and structured need.

In this phase of his work the artist wants to make believe the stimulating and at the same time provocative idea that to make art is to enter the anarchy of the essence of structure. But on the contrary, these works, full of light and color, refer to a concrete vision of today's world, in which the artist is well aware of the assimilations that derive from the different cultural crossings he has encountered during his formative and creative path. Paul Valery wrote that "beyond the quantized vision of science and beyond the solemn vision of shistory, there is a richer vision, more difficult to represent, more singular of time, that of time-that-happens, which opens us to wonder, as to the adventurous impact of history, which in fidelity to his own nature, man must return to inhabit". To signify that in any case art, even today, always remains the only existential segment between human hope and poetry.