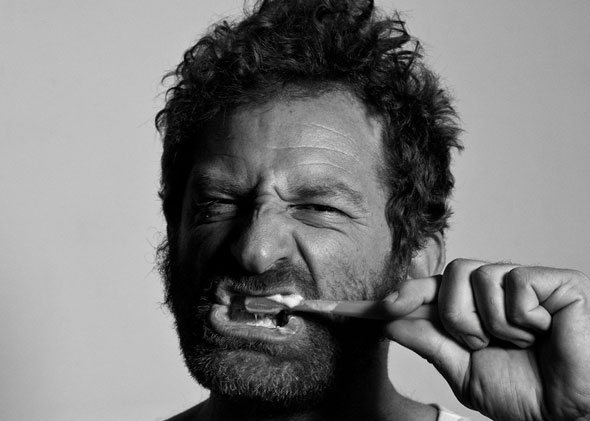 Born in Udine on June 19, 1973, his research is expressed through sculpture and drawing. He looks for new forms elaborating the archaic systems of the working of materials such as marble, bronze and iron.
Dormino entrusts all his artistic research to the monumentality of the executive process: in every work of his there is a research of sense through the reference to unavoidable themes for Man.
He dialogues with dimension, working at every scale that is able to represent the idea and insert it in the appropriate container. For Dormino every artistic manifestation becomes fertile ground through which to relate to the external environment in an exclusive and incisive way. Flows, vectors, bridges, small and large works, materials transformed without artifice but adapted to the will to interpret the spirit of the timeless artist.
He has created works of public art in Italy and abroad, in 2011 "Breath" the Monument to Haiti made a year after the earthquake disaster, commissioned by the United Nations.
He is currently working with "Anything to say? "an itinerant sculpture dedicated to courage and freedom of information that began its journey from Berlin (Alexanderplatz) on May 1, 2015 then the work has moved to Dresden (Theatrerplatz, Ostrale), Geneva (Place des Nations), Paris (Place Georges Pompidou), Strasbourg (Place Klèber), Tours (Gare de Tours), Perugia (Piazza IV Novembre), Belgrade (Dev9t Festival), Ptuj-Slovenia (Art Stay Festival), Rome (p.le Aldo amori). For this work he received from the French organization AntiCor the Prix éthique 2016.
He has participated in the Biennial of Stone in Portugal (2003, 2005), the 5th edition of La Escultura en Norte in Spain (2009), the XIV Biennial of Sacred Art (2010), Un'Ita-Italian Artists in New York (2011), Ostrale 012 in Dresden, Germany (2012). He has exhibited at the C.I.A.C. of Genazzano, Rome (2008), at the Accademia dello Scompiglio, Lucca (2010), at the Venaria in Turin (2013), at the Castle of Rivara (2013).
He has held solo exhibitions in Rome, Turin, Milan.
He works in Rome and teaches Sculpture and Drawing at R.U.F.A. Rome University of Fine Arts.