Pyros [πυρο], Written in the Fire 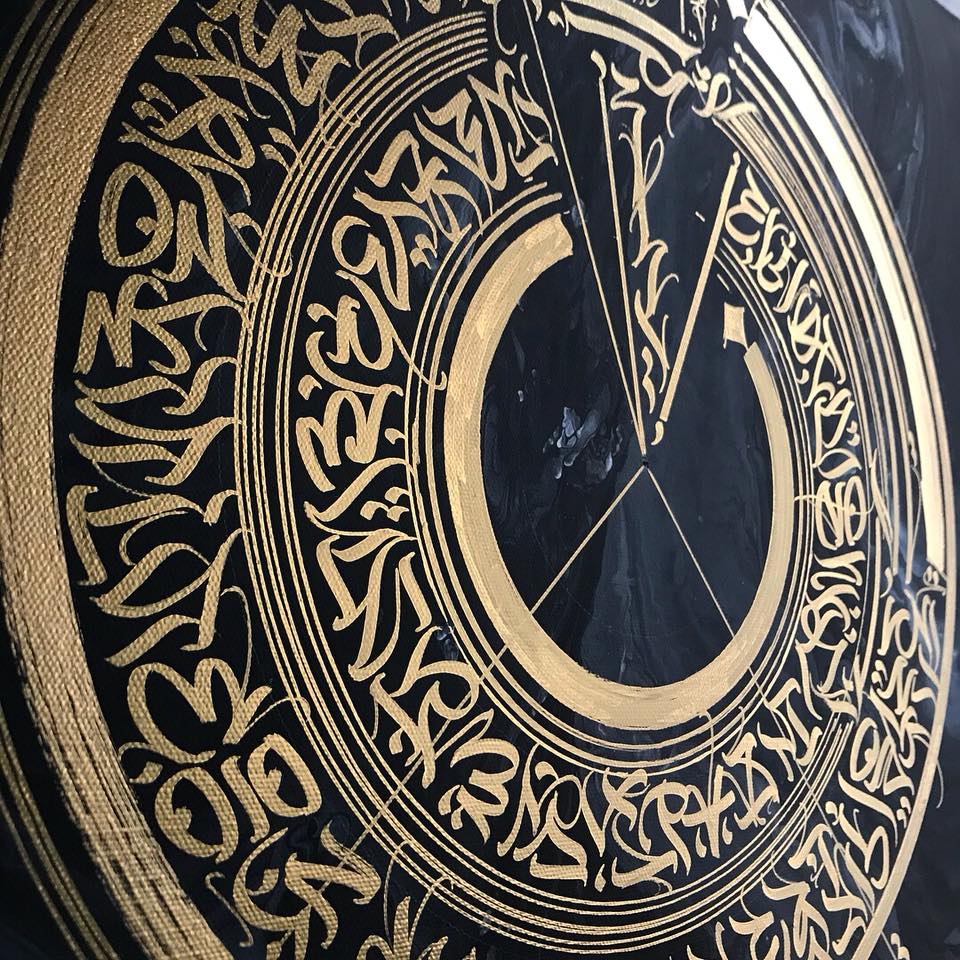 The twelve canvases presented in Pyros, Written in Fire, create a path that marks the evolutionary transition from early age to Patrick Eduardo's artistic maturity. Error Connection is the starting diptych, two canvases that show the artist's past, is the first stage of evolution, tracing the distinctive style that has marked Eduardo's career to the present day. At the bottom, the opaque strokes are already a sign of passage towards the new, the large gold "X's" run from corner to corner through the canvases, representing an error of reception that connects the old to the new reality.

Thus we pass to Present Illusion, an intermediate triptych, union of the old and the new, between the classic and the modern, between the past and the present of the artist. The central diagonal presents once again the style that until today has characterized the works of Euardo, gold on an opaque black background, to form concentric circles that occupy the entire perimeter of the canvas. On the sides, however, the color begins to make its way, an integral part of the study begun in 2019, which gradually occupies an increasingly large space, integrating alchemical symbols and more delicate and refined strokes. The contrast of colors and optical illusions are the master creating an inverse blackout: from the darkness emerge with arrogance green, blue, fuchsia and purple, and white and ochre begin to make their appearance, the dark era of the artist is coming to an end.

The following two canvases, The Fire Of The Moon And Sun once again present this dichotomy, the clear division between Eduardo's maturity and artistic "adolescence". Once again the concentric circles are an integral part of the old style, but they fade away in the transition to the new era. Fire is the key element of the work. Like fire, the new style burns on the old, making its way through the darkness of the past, giving new life, like a phoenix, to a reborn Eduardo.

Thus we come to Luminescence, modernity has now prevailed over the ancient, colour has prevailed over black, fluo dominates the opaque base. Once again it is fire that prevails, represented as natural energy. Fluorescent enamel prevails over gold, brown and silver, highlighting the maximum contrast between earth and fire in a contemporary key.

The last stop on Eduardo's artistic path is Chirographum 1853.

"The princely families, or ducal families, who have obtained such a title in the past or in the future will be able to obtain such a title from the Holy See; and who have their main domicile in Rome, without being included in the register of Roman Nobility, from now on they will be part of it; and from the same families it will be possible to be right to complete the number of the sixty conscripted patricians wanted by the said Constitution of Benedict XVI in cases of absence.

So says the Chirograph of 2 May 1953 of Pius IX, sanctioning the process of registration of the Roman noble families. And it is to them that the work is dedicated, that like a chirograph he dismembers his figure in five canvases, which united in a single composition give the ultimate meaning of the work. The colours follow those of the main element of the exhibition: fire. The part below, like a lava flow, burns the calligraphic symbols in a new, reborn Patrick Eduardo, never explored before, which unites Renaissance, pop art and street art in the work that thus closes Pyros, Written in Fire.