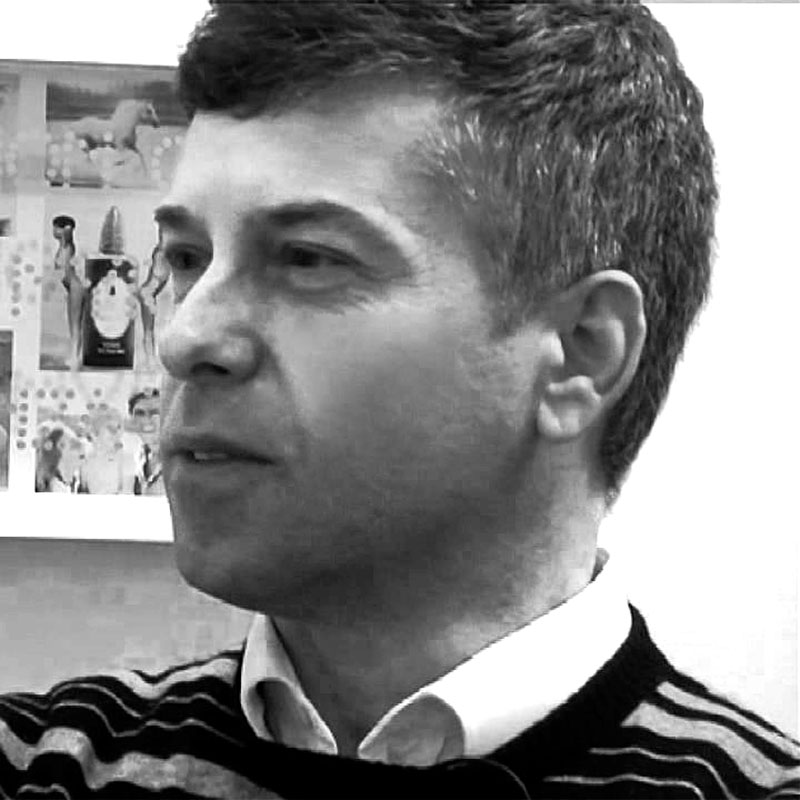 Francesco Impellizzeri was born in Trapani in 1958 and graduated in Painting at the Academy of Fine Arts in Rome, where he lives and works.

In the mid-eighties he began a pictorial research on sign/color in relation to music and rhythm.

1986 is the year of his first personal exhibition in Rome "Pulsioni Blu Cobalto" at the Underwood Gallery.

The expositive path continues with important collective exhibitions such as "Pittori & Pittori" at the Bevilacqua La Masa Foundation in Venice in 1988.

On the occasion of the personal Temple Gallery in Rome in 1990 presents the first performance "Strilli". From that moment on, the performances follow one another and stereotypical characters are born, while photos, paintings and videos complete the exhibitions.

The following year he exhibited at the IIC of Algiers at the exhibition "Proposizioni Romane" beginning a period of exhibitions and performances with "Colori Sonori" at La Nuova Pesa in Rome, "Canzoni in Vetrina per la Biennale" at the Fiorella Gallery in Venice in 1993, "Besos, Canciones, Santos y Estrellas" at the Ateneu de Cadaques in Spain in 1994 and "Giochi di Corte o di Cortile" at the Trevi Flash Art Museum in Trevi (PG).

For "Artists' Choice", at the American Academy of Rome in 1995, presents the installation "There is a white house that ...." and performances: "The Angel Candito" on the tower of the Valadier of Ponte Milvio in Rome and "Larvamento amoroso di Rokkodrillo", in Polignano a mare (BA) by the gall. Zelig.

In 1997 he began a ten-year collaboration with the gallery Espacio Minimo in Madrid.

While in Italy in 1999 he presented the performance "Desfilè: mannequin per nient" on the occasion of the exhibition "Corporea" at the Castle of Rivara (TO) repeated in 2005 at Villa Manin Passariano (UD).

"Meteorismi" at the gall. Il Ponte Contemporanea in 2000 is an ironic installation in the form of little clouds.

In 2001 he participated in "Neue Heimat" at the gall. Falzone of Mannheim (Germany), proposes "Gnam,Gnam" performance at the MACRO of Rome and "Motocicletta" at the Forum Fabricum, Lodz and C. Art Center of Poznan.

The following year he participated in the exhibition "The Dream, the Color, the Sign" which was presented at the Italian Cultural Center in Istanbul, Amman, and the IIC of Ankara.

In 2003 the Spanish critic Paco Barragan, after having included him in the book "El Arte que vien", invites him to the exhibition "Don't call it performance" which, from the Museo Reina Sofia Madrid, continued in the main Spanish museums and ended at the Museo del Barrio in New York.

In New York he also participated in the exhibition "Young Italian Genome" in 2003 at the gall. BUIA.

In 2003 he presented to the public the "Pensierini" that replaced the sung word through sheets of elementary school notebooks in which he commented on facts of custom, political and private seen as from childish eyes but whose content and design reveal the ironic world he has always told.

In 2004 they will be the protagonists of "Pensierini, Palabras y..." at the gall. Espacio Minimo in Madrid, "Melting Pop" at the Palazzo delle Papesse in Siena and the "Vema Project" in 2006 at the Architecture Biennale in Venice.

In 2006 he realizes the performance "ArtSaint Loop" at the fair ARCO stand gall. Espacio Minimo of Madrid.

In 2007 the performance "Motocicleta" is represented at the DA2 Contemporary Art Museum of Salamanca (Spain) the personal "Riassunto: Pensierini, parole e....." at the gall. Bonelli Arte Contemp. of Mantova while in 2008 his works became part of the Collection of the Ministry of Foreign Affairs in Rome.

The new pictorial phase "Per l'Appunto" is exhibited for the first time in 2009 at the exhibition "L'Arabesco" at the Galleria Santo Ficara in Florence.

At the MLAC of the Sapienza University of Rome, in 2010 is set up an exhibition with 20 videos of the most significant performances and a large gallery of costumes, photos, works, gadgets, projects and props.

Gibellina, (TP) and the following year at the exhibition "We are all Greeks" at the Benachi Museum in Athens.

He exhibits at the exhibition "Il Corpo Solitario" at the Palazzo della Penna in Perugia in 2014 while in 2015 he participates in "Le Volets de Noel" in the Ville de Biot in France.

"M'è nnata un'idea", is the title of a new performance at the Fondazione Menna in Rome dedicated to Filiberto Menna and Maria Lai.

In 2017 he participates in the exhibition "Lights and Transparencies" at Galerie Etienne de Causans in Paris.

In 2019 he exhibited at the exhibition "El Ultimo Espaliù" at the Real Academia di Spagna in Rome and created the installation "Souvenir" for the Museo delle Trame Mediterranee in Gibellina while the work "Art Saint Loop presents" from the Collezione Farnesina in Rome is exhibited at the Museu Nacional dos Coches in Lisbon and the following year at the IIC in Paris.

In the latest works the color of the initial chromatic research merges with the silver painted texts, also presented through installations enriched by sounds or musical performances.

In addition to numerous exhibitions in galleries, museums and international fairs, he has participated in several television shows and films.